One thing we learned this past week is that it’s perfectly alright to break into a liquor store and drink an entire bottle of bourbon, so long as you are a marsupial. This is what happened Thanksgiving at Cash’s Liquor Store in Ft. Walton Beach, Florida. When apprehended, was the opossum in question made to walk a straight line or count backwards from 100? Was Mrs. O called down to the station to berate him for being such a loser? Was he read his rights and slapped in the cooler for the night? No-o-o-o. Mr. Big Shot marsupial was taken to a shelter where he was given fluids and nourishment and then released into the wild. Two liters of Coke and a Wendy’s triple usually does it for certain people we can think of, but then they are not, so far as we can tell, marsupials. 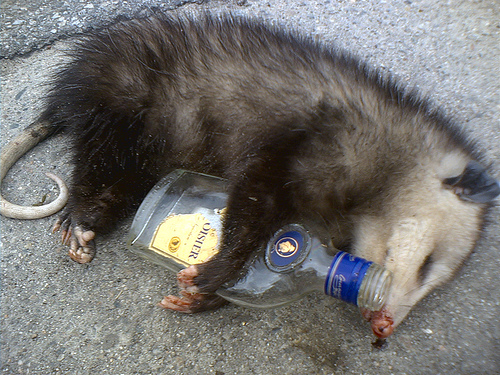 Which brings us to our second major news story. Brown University has announced a policy of allowing students to “self-identify” as persons of color. We’re going to go ahead and assume the color in “of color” is more likely to be a Beyonce shade than a Taylor Swift. Still, it’s nice to be able to choose the tint or hue that suits you.

Other colleges allow students to identify as whatever they like.The University of California, Davis, gives financial aid to students who identify as gay or lesbian or, you know, the other initials, or even as illegal immigrants. This – the illegal immigrant part – would seem problematic given the current political climate. How close to being deported would you want to get before you went, “Whoa, hold on, ha-ha, I was just kidding around! I just did it for the scholarship money!”

Of course it’s well known by now that women’s colleges have been admitting guys who think they’re girls, and even some sororities have followed suit. We believe there are several motion pictures that have featured the guy-in-the-sorority scenario, most of which you can find in the $5 bin at Walmart.

Then when you wake up on the floor of Cash’s Fine Wines and Liquors with an empty bottle of Four Roses on your chest, the Russian Army marching up and down your tongue, and Ft. Walton Beach’s finest looking on and snapping their cuffs, why can you not simply, assuming you can complete a declarative sentence, announce that you identify as an opossum?

Hold on, now, we’re not advising that anyone break into a state store. But let’s say that some evening, through no fault of your own, you get locked up on a summary public intox charge. Why not use it as a test case? If you don’t already have a lawyer to handle it, you might find one among the other inmates. Just ask around for someone who identifies as a weasel.

And now for our continuing series, “Hey Weiner!”, initiated in response to former congressman Anthony Weiner’s appeal for pen-pals while incarcerated:

Hey Weiner: Tell the truth, Burfict’s been totally asking for it for years now, right? Besides, Juju was just delivering a nice, crisp, legal block.

Hey Weiner: Seriously, Myron, God rest his soul, would have totally approved of that block. As would Hines Ward who, like, left a trail of broken Bengal bones n at.

Hey Weiner: You’re in the clink up there in New England, right? So do us a favor and tell pretty boy Brady we have someone we’d like him to meet.

Weiner: Are all you people from Pittsburgh? Sorry but I didn’t watch Monday Night Football. I was teaching this class in portrait photography, so . . .

Hey Weiner: I have this buddy who’s sort of a short guy and he’s always reading, so I wanted to get him a vanity plate that said. “WEE-NERD”. What do you think, can you whip up something like that in the prison shop?