Last week NASA scientists announced the discovery of an earth-like planet known as Kepler-186f. And by “earth-like” they don’t mean crawling with wackos. It’s more a question of being close enough to it’s “sun” to get an all-over tan but far enough away that your IC Light doesn’t boil over. The key seems to be liquids, i.e., the state of matter in between solid and gas, and while “scientists” may be all worried about liquid water, the Idler is firmly of the opinion that any alien race that isn’t sufficiently advanced to keep its beer in liquid form wouldn’t be worth visiting anyway. Unless we can develop roof rack technology for our space vehicles capable of transporting enormous coolers. They’re probably hard at work on this at the Johnson Space Center. 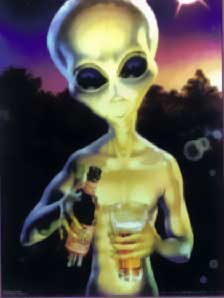 This newly discovered exoplanet (the “exo” part means it’s not in our solar system) is reportedly 500 light years away. That means that whatever we’re seeing of it happened in 1514. They may be far more advanced than that now, but the pictures won’t reach us until 2514, by which time we’ll all be totally George Jetson and have flying cars and sassy robots and then who will care about some far off rock where their beer boils between innings?

Of course, they might be looking at us right now and seeing stuff that happened 500 years ago, so they’re probably all, “Look at all those dorks dressed up like Ponce De Leon! Ha-ha! They haven’t even developed the snap-top can!”   So we should probably start broadcasting messages into space saying “Attention, extraterrestrials: what you’re seeing happened a long time ago and we’re way cooler than that now. And in case you’re thinking of invading us, first take a look at these Miley Cyrus videos.” Just sayin’.

The way to avoid all this time-related confusion is to put Kepler-186f on the interstellar back-burner, so to speak, and find some exoplanets to ring up that are a little less exo. In June of 2013, NASA scientists found three planets in the habitable zone of a nearby star called Gliese 667C, which is only 22 light years away. Which means that if they’re checking us out, they’re now noticing that we’ve elected Bill Clinton president. So that won’t make us look like idiots or anything. But they’ll also notice how we’re still using Windows 3.1 and forgetting to rewind our VHS tapes. They’ll also probably notice that although we had fire-brewed Strohs, we as a civilization hadn’t yet advanced to the point where we could offer them cold filtered Miller’s, cool-twist Bud Light, or frost-brewed Coors Light.

At least Gliese 667C is in a pretty cool constellation, Scorpius, which is Greek for – you guessed it – Scorpion. Kepler-186f, on the other hand, is in the constellation Cygnus, which we’re pretty sure means Certified Public Accountant. Also, we couldn’t help but notice that there are two constellations, Corona Austrina and Corona Borealis that the ol’ Kepler hasn’t probed. I’m sure we could find some astronauts willing to go out for a couple Coronas. They’re only going to stop for one, though, right?