God knows we weren’t asking for much, I mean at least at the end there. The team had gelled in recent weeks, and fans at the bars and diners, barbershops and beauty parlors were left to wonder. If we could only get into the playoffs with this team, not the stumblebum September team that lost the first four, but this one, the December team, the one on a winning streak. And they said to each other, “You know, if they had won one of those early games . . .” and, “Suisham only missed two field goals all year, both of them at Oakland where we only lost by three . . .” and “Dang, I hate the Ravens!” But the realists pointed out that it didn’t look very promising. We’d be lucky to finish 8 – 8, and how often does a team without a winning record make the playoffs? But suddenly a lot of the other teams began to falter, and there we were, at kickoff of the last game of the regular season, with a chance, a very slim chance but a chance, to make the playoffs.  We had to win and three other teams had to lose. Terrible odds at 1:00 PM, but by 4:30 PM the odds had improved considerably. The Steelers had the W, and two of the L’s, Baltimore and Miami. They needed one more loss, by San Diego against Kansas City.

But hold on, Kansas City, the clearly superior team, was resting most of its starters. The Chargers would manhandle these impostors. But we had to watch because, well, a football is an oddly shaped thing and it can take some unpredictable bounces. And so it was that the game became a titanic struggle with the no-name Chiefs fighting gamely, giving as good as they got, and arriving at the Chargers’ twenty-four yard line with the score tied and only seconds on the clock. We were in!

It was a chipshot, a sure thing. You could stop ten people on the street and nine of them could make it. Every one of the Radio City Rockettes could make it. The Idler could make it blindfolded with a beer in his hand and not spill a drop. Helen Keller nails it three out of four. 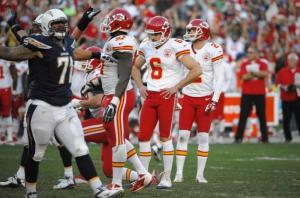 This is not your ordinary level of incompetence, nay, of treachery. This is build-you-up just to let-you-down Affordable Care Act style malfeasance. This was a cruel joke perpetrated by an inhuman little sadist with an arrowhead on his helmet. It’s not enough to despise Ryan Succop. This moment must be commemorated.Therefore I propose that a ballad be commissioned to memorialize this despicable fellow just as we praise our heros. The Succops of the world must be made to know that their foul deeds will not soon be forgotten. Here are a few proposals for “The Ballad of Ryan Succop”:

“The Ballad of Ryan Succop”:

(To the tune of “The Ballad of Davy Crockett”)

Played for a football team in Kansas City,
His kicks weren’t long and they weren’t too pretty,
To win a big game he was given a chance,
Kicked like a guy with  St. Vitus dance
Ryan, Ryan Succop, we’ll always hate your guts

Standing in the Chargers’ own red zone,
Looking at a 30 yard poke,
The guys on the bench said, “You must be a mensch,
You realize it’s no time to choke”
Coach you know it ain’t easy
You know how hard it can be
The fans back in Pittsburgh
They’re going to crucify me