A very happy, healthy and festive Thanksgiving to you and yours from the Idler and his! Thanksgiving has always been an extremely popular holiday at the Idler’s house, a status I think it owes in part to the nearly complete lack of obligation associated with it. Maybe not for the cooks and the grocery shoppers and the bakers, but certainly and traditionally for the Idler. For sluggards like yours truly it was largely just a question of showing up and eating a lot. You might want to bring a bottle of wine or some Jordan almonds or something but nobody was going to make a big deal of it either way. If you’re a kid it’s even better. You had to put up with your older and better-off cousins making fun of you but you could tease the younger and more raggedy ones mercilessly. Sure, you might have to stand for your grandmother and aunts fussing over how big you’d grown, but later on when the old folks were playing 500, one of the uncles was sure to slip you a couple of bucks to fetch beers for him, at least until your mom gave you “the look.”

But since you’re now allegedly an adult, you may find yourself in the unfortunate role of “host.” Suddenly you’ll be forced to analyse and synthesize a mountain of data relative to, well, your relatives. For example, as host, it’s almost a necessity that you know your guests’ names and how you’re related to them. Not only that but you’ll have to know which ones are teetotalers, which ones were abducted by aliens, which ones are 911 “truthers” and which ones shouldn’t be hanging around the liquor cabinet. You’ll need to keep the communists away from the right wing extremists and the cargo cultists away from the church ladies. It’s exhausting. 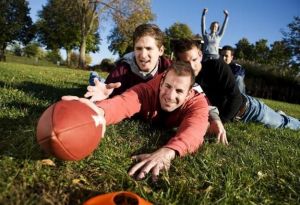 As a service to you, the home reader, the Idler herewith offers a simple yet elegant solution to your hosting predicament. Organize a football game. Before you object, let me enumerate the benefits: First, you can wear sweats all day. When your wife gives you the Is that what you’re wearing? routine, you tell her, “Well, duh, I’m taking the kids to play football and keeping them out of your hair while you’re cooking” You’ll be amazed at how well that works. Second, you don’t have to actually play football, which can be hazardous. You can let the kids pound on each other while you referee: After further review it has been determined that Billy was out of bounds when he tripped over the dog. There will be no interference penalty on Sparky. If you time it right and there are no visits to the ER, by the time you get back, dinner will be ready and as long as you wash your hands and don’t have clumps of turf falling off of you into the stuffing, no one will care how you’re dressed. Alternate calling everybody “Sport”, “Sweetheart”, “Champ” and “Beautiful”, regardless of gender. They probably won’t remember your name either. Oh, and one more thing. Slip Billy a couple of bucks and tell him to keep the cold ones coming.